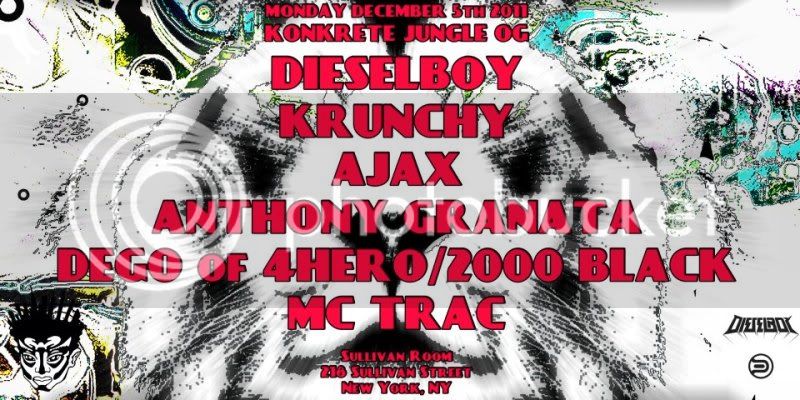 The best known face and sound in American drum and bass for over a decade belongs to Brooklyn-based Dieselboy, aka Damian Higgins. Now an international icon in this underground dance music movement, Dieselboy is the most in-demand American d&b DJ on the global club, festival and rave circuits on six continents. Since the early ‘90s Dieselboy has pioneered drum and bass in North America. His prized mixes have been the gateway for countless loyal fans to the high energy, futuristic, science fiction vibe of d&b.

Dieselboy has an intense week in / week out touring schedule and has played most of the major festivals including Coachella, Bonnaroo, Electric Daisy Carnival, Nocturnal Wonderland, Ultra, Love Parade, Starscape, Shambhala, Movement, Virgin Festival, Creamfields (UK), Jisan (Seoul), Phat (NZ), Pirate Station (Russia), and on and on. His original music has been featured on MTV and ESPN as well as video games, commercials, etc. He has also been featured on the cover and inside of many magazines including URB, Billboard, DJ, DJ Times, and Mixmag.

DIeselboy currently runs two record labels including the celebrated US drum and bass imprint Human and the recent dubstep and electro up and comer SubHuman. On top of all of this Dieselboy has also conceptualized and initiated the longest running tour in electronic music, Planet of the Drums, and the recent metal-themed multimedia extravaganza Monsters Of Jungle.