Based in Brooklyn, NY, The Pond is a live DnB/Jungle broadcast heard
on jungletrain.net every Thursday evening @ 6:30pm EST (GMT -4).

No stranger to The Pond, tonight's guest steps back in
time to deliver an all DnB set. 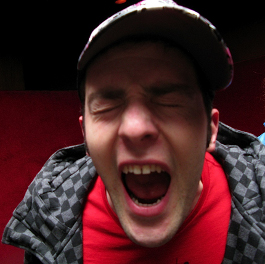 DJ, producer and multi-genre purveyor of bassy awesomeness
Proper Villains has amassed a steady-growing catalogue of
remixes and original tracks that keep the clubs bumpin’.

Proper Villains has played from coast-to-coast, gaining
recognition for his clever style of mixing electro, house,
hip-hop, and dubstep with his own productions. His talent
for throwing in the unexpected gives his mixes that
“Holy @#$%, did he really just do that” quality that makes
everyone on the dance floor smile. Proper Villains says it’s
okay to break the rules, as long as it’s done properly.

An in-demand remixer, his remixography includes such artists
as Rochelle, Stereo MCs, the Cataracs, Kidz in the Hall,
DJ Ayers, Theophilus London, and Cubic Zirconia.. In collaboration
with Jess Jubilee, he remixed Roxy Cottontail’s “Double Dare,”
which was featured on the MTV show “My Life as Liz.” His debut
EP on Southern Fried Recordings received heavy club play and
was featured on several DJ mix compilations including the
Black Ghost mix CD, while his Big Apple Bounce EP, a collection
of rave-influenced Baltimore club smashers, was released as a
limited edition vinyl 12” on Philadelphia’s Flamin’ Hotz imprint.

Look out for an upcoming EP on Nightshifters, a single on Play Me Records,
remixes for Dim Mak, Ghetto Division and much more.

Hit us up in the chatroom... http://www.jungletrain.net/chat/